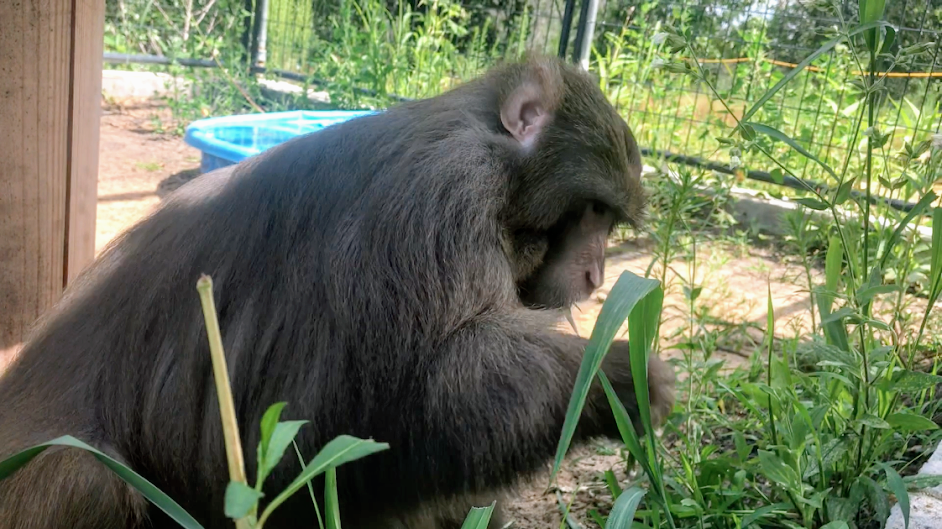 Life After the Lab

Not all animals used in research are terminal. Some are needed for training, behavior, or blood samples, and then either transferred to another study, or in some cases, released for adoption. I personally have adopted a few former research animals. A rat (Joe) was an extra pup that was not needed (he lived 6 great years with us), a rabbit (Frosty) that was a sperm donor for a birth control study (who lived another 9 years after I adopted him), and a cat (Kat Von D) that trained our Life Flight team how to intubate, because they have a tricky epiglottis (she is still alive, and is now 12 years old). But what happens when you have a non-Human Primate that is no longer needed? It’s obvious that they cannot go into private ownership, but what are the other options besides transferring to another study or euthanasia?

This was a dilemma I was faced with 4 years ago. We had two, healthy Rhesus Macaques, who were finished with a behavioral study. They were very nice, trained, and only 9 years old (the life span of a Rhesus in captivity can be around 30 years.) After talking to my research professor, and our team of veterinarians, we discussed retirement to a sanctuary. I had their support,  IF I could find somewhere for them to go. No current or previous researchers from our institution had ever retired an NHP before, so I was pretty much going about this on my own.

There are only 10 primate sanctuaries currently in North America. I started at the top of the list, emailing whoever would respond to me, and worked my way down the list. The first few I contacted were full with a waitlist. I was getting more discouraged by the day. I reached out to Primarily Primates, who informed me of this new sanctuary called Primates Incorporated in Wisconsin, and I should contact the founder, Amy Kerwin. I was so appreciative for the insight, I quickly emailed Amy.

Amy had just received her first residents at Primates Incorporated. She had spent the last 10 years designing her sanctuary, (read about her story here: Old World Monkeys Retire In Rural Wisconsin – Wisconsin Life). Amy responded to my plea for help. She told me that she needed to build more space to take on more primates, but that it was possible. She had a list of things the animals needed to have done before they could be retired. That list of things included the following:   sterilization, a full blood panel, and a brief history of what type of experiments were done on them, as well as any potentially long term effects. The last thing she requested was $15,000 for each monkey for their first year of expenses at the sanctuary.

No current or previous researchers from our institution had ever retired an NHP before, so I was pretty much going about this on my own.

I understand the costs of housing and caring for a NHP, but for someone managing grant money, I didn’t know how I could make that work. My research professor informed me that NIH grant money cannot be used for retirement. I had to start thinking outside the box. There is a new organization called the Animal Retirement Foundation (ARF) Non Human Primate Retirement Foundation (rarfoundation.org), which raises money to fund the retirement of NHP’s. I thought they might have some money to help us with our retirement. I reached out to the founder, Rachele McAndrew. She said their account was low, as they had just helped fund the first residents at Primates Incorporated, but offered some other great suggestions for fundraising.

Our institution has many generous donors who have helped build hospitals, libraries, stadiums and such, so out of a wild whim, I contacted the VP of Charitable Contributions. I received a very kind phone call stating “We appreciate your interest, but at this time we are unable to help.” I am sure with the concern of animal rights activists getting wind of research animals, they chose to not have involvement. Again, I understand the political aspects of it all. But I was not ready to give up on our animals.

I have a tattoo artist who has a daughter with type 2 Diabetes, and understands the need for animal research. I was sitting in his chair one afternoon, explaining my retirement dilemma, and asked if he would be interested in hosting a fundraiser with his artists, and tattooing for Primates Incorporated. He said he needed to talk to his artists, and he would get back to me. After about a week, he called me and said they were all on board. They would design some tattoos that were monkey related, and a date was set.

I emailed Amy back and let her know we had a plan. I was certain I was not going to have the $30k needed right away, but that I was working on it. She emailed me back and said she would take our animals. I was elated. She said she needed a couple of months to finish building their enclosures, but we had a tentative date.

I contacted our veterinary team, and set up TB testing and bloodwork, and they contacted the transport company for delivery dates, and everything was moving along well.

The day came when our animals were transported to Primates Incorporated. Every animal technician that was available was there to bid them farewell. It was a very emotional day, as I was sad to see them go, but also knew what life they were about to have and I was so thrilled to be a part of that. They arrived safely to Primates Incorporated, after a long country trek.

Our fundraiser brought in about $2K, and my tattoo artist matched that amount. My research professor also contributed an undisclosed amount every month for a year. I took their logo, and made lanyards and key loops, and I send Amy hundreds every year, so that she can sell them or give them away .  I donate when I can as well as share Primates Incorporated fundraisers and awareness. Primates Incorporated now has 11 residents and is now a member of the North American Primate Sanctuary Alliance (NAPSA) Primate Sanctuaries Home – Primate Sanctuaries.

This has been the most rewarding thing I have ever done in my life. Although I am limited to whom I can tell about it, those who know me, know this story. It helped boost the moral of my co-workers, family and friends, and to be able to see these animals living a content life in a sanctuary setting, is a feeling I will never truly be able to describe. For pictures, donations and more information on Primates Incorporated, please look here: Primates Incorporated – A Peaceful and Relaxing Sanctuary for Monkeys.